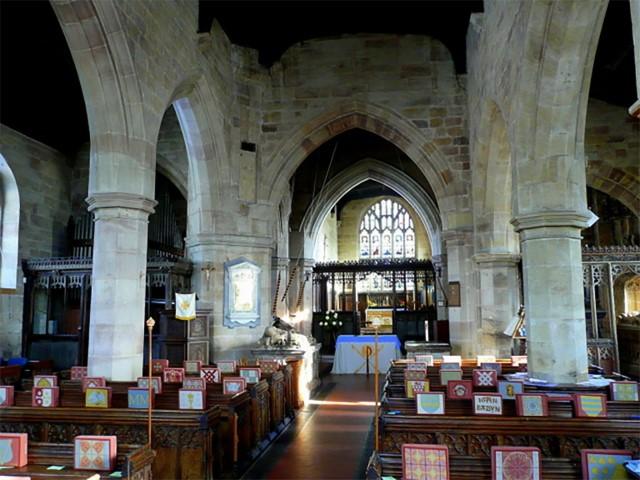 My wish is that people who come here for whatever reason may find something special that gives them pleasure and encouragement.I do not mind if it is through the ancient building, its treasures, its history, its beauty or because of some indefinable ethereal presence.
God is in all things and we are all different and so we sense the divine according to our own temperament and background.
Above all I pray for the individuals who gather together as a community on Sundays, believers and sceptics, to praise and thank God for blessings received or to pour out their troubles and sorrows.
Yes, I offer my prayers for this community, far-flung in their daily lives, that by some mysterious thread, which I understand to be the Spirit of Jesus, we can put ourselves to His work of redeeming the world from its selfishness and lust for power.
We are only a small and fluid group of people. We are imperfect ourselves, but I believe we are called to be His, the tiny bit of yeast that ensures the dough will rise. And my joy is that anyone can join in or leave at any time, but that there is always that leaven fermenting away at the heart of who we are and what we do.

O Breath of Life, come sweeping through us.

Born in 1944 in Hove. After the war Pippa’s father, Philip Mander, moved back to the Midlands to spend the rest of his life in the manufacture of paint and varnish.

After school Pippa studied French and English at Exeter University and married a local solicitor, John Thorneycroft in 1965. They have 4 children and 11 grandchildren.

Pippa was ordained deacon in 1988 and priest, when women were first allowed to be priested, in 1994. She has worked in small country parishes and suburban ones, but her main parish from 1996 – 2009 was Shareshill (which includes Featherstone) and later Essington as well. She came to Tong in retirement in 2014.

Pippa has been involved with the diocese in various rôles – on the Greater Cathedral Chapter ( as a Prebendary), Diocesan Advisor for Women in Ministry, Rural Dean of Penkridge, and she also had the privilege of being Chaplain to the Queen  2001 – 2014.

Taking on the oversight of St Bartholomew’s  has been an engaging learning curve, getting to know the people of the parish and  members of an eclectic congregation; also for the first time being part of a tourist attraction and interacting with many visitors. She feels that any church with a heritage like Tong  implies that we are “Guardians of the past and Custodians of the Future”.  With this in mind  she is committed to necessary restoration work but also providing modern facilities to secure Tong’s place in its seventh decade and beyond.

I was born in Belfast on the 7th July 1953 one of seven children of which I am a twin. I joined the Royal Air Force in 1972 at the age of 18 and served almost 27 years after which I continued for a further 20 years as a civil servant as an instructional officer (weapons) at RAF Cosford and retired in July 2018 and took up the post in 2019 as Church Warden. I have been married to my wife Ruth for 40 years with one daughter Rachel.

I was baptised at Tong Church and Confirmed in 2018 although I was brought up as a Presbyterian, I had no difficulty in fitting into Church of England life as many of the congregation come from various religious denominations and backgrounds. I found the Church to be very welcoming with a wonderful congregation and have made many friends. We have had many wonderful holidays with some members of the Church over the past twelve years.

My hobbies include playing golf and listening to various types of music. I enjoy watching movies from the forties to the present day. Also I have a strong fascination with history, so the story of Tong Church and it’s links to Oliver Cromwell, William Shakespeare and Charles Dickens captivates me.

Born in 1954 I have lived the majority of my life in the Wolverhampton area. It was while I was living in Bushbury that I first started to regularly attend church, all be it for monetary reasons! I did not fancy doing a newspaper round but found out I could be paid for singing at weddings as part of the choir. The influence of the Vicar and his wife at the time proved crucial in the formation of my belief in God, for which I will be eternally grateful.

In 1970 I started as an apprentice with a local Aerospace company where I eventually went on to complete 41 years prior to retirement. I was fortunate to be able to perform a number of roles within the company from setter/operator to a number of Management positions. As a IT Project Manager I was required to work on implementation of a number of systems worldwide.  I like to think that meeting and working with lots of people from other countries and cultures helped me to become far more patient and considerate than if I had not experienced that role.

The most important influence on my life though has to be my wife. We met in 1972 and married in 1973. We got married at Cranmer Methodist Church and that led to a number of years attending and working for the Methodist church. We have two children and two grandchildren. It was through my son that we have now been attending St Bartholomew’s, Tong for the past 17 years.

Our son decided to get married at Tong and asked us if we would go along to support him. As we were looking for somewhere new to worship at the time, we of course agreed. We immediately felt at home; we received a fantastic welcome and have enjoyed a continuing fellowship there ever since.

The Tong Vision for 2020 and beyond had a target to raise £500,000 over 3 years in order to fund urgent and
essential restoration work, and to ensure that all visitors and congregations can continue to enjoy this unique building! If you can
offer your support either financially, in-kind or otherwise, please contact Revd Pippa Thorneycroft ( pippa.thorneycroft@icloud.com ) or
the Vission2020 “Support Us” page on this web site, or visit our JustGiving page by clicking on the image, below.

A big thank you to all our supporters! Particular thanks go to the following:

Find us on Facebook:
If you have visited us, for whatever reason,  we would really appreciate it if you would visit our Facebook page and leave a comment, review or a picture or two!
Facebook link

The Tong Vision for 2020 and beyond has a target to raise £500,000 over the next 3 years in order to fund urgent and
essential restoration work, and to ensure that all visitors and congregations can continue to enjoy this unique building!

If you can offer your support either financially, in-kind or otherwise, please contact Revd Pippa Thorneycroft (pippa.thorneycroft@icloud.com) or visit our JustGiving page by clicking the image, below.

At present there are no toilet facilities at Tong Church.  For an organised tour and at weddings, baptisms and funerals as well as Sunday services, access to the Parish Hall (two minutes walk) is available.  For concerts and fêtes we usually provide portaloos.

If you find it difficult to walk up the slope to church to attend services please let us know by sending someone ahead or Tel: 07970 869011 and we will provide assistance. We regret that we are unable to offer this support during the week for visitors.